Best of Gozo and Comino

Comino Hop On Hop Off


Malta, officially known as the Republic of Malta (Maltese: Repubblika ta' Malta), is a Southern European country consisting of an archipelago situated in the centre of the Mediterranean, 93 km (58 mi) south of Sicily and 288 km (179 mi) east of Tunisia, with the Strait of Gibraltar 1,826 km (1,135 mi) to the west and Alexandria 1,510 km (940 mi) to the east.
Malta covers just over 300 km2 (120 sq mi) in land area, making it one of the world's smallest and most densely populated countries. Its de facto capital is Valletta and the largest town is Birkirkara. The main island is made up of many small towns, which together form one Larger Urban Zone (LUZ) with a population of 368,250 (majority of the population of the country) according to Eurostat. The country has two official languages – Maltese and English – with Maltese being considered the national language. 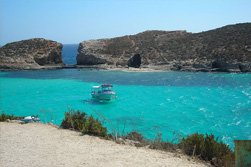